The Springs Memorial Cycle Way 1915-2015 commemorates those of Springs County, Springston and Lincoln townships, University, and further afield, who died in the service of their country.

Springston is a small rural Canterbury township on the South Island of New Zealand. It was developed around the mid-19th century. It has a historic primary school, opened in 1868. Secondary students usually attend the nearby Lincoln High School.

Springs County Council was the operative local government body from 1911-1963 for the area just south of Christchurch, now covered by today’s Selwyn District Council.  It received the initial request to erect a county war memorial to those from the County who had fallen in the Great War (1914-1918) on 24 January 1919.  Springston Patriotic Committee had written to the Springs County Council requesting the calling of a public meeting to consider the erecting of such a county war memorial, but there was some government opposition when funds were still needed to assist repatriating troops.  Nevertheless, by Sunday 30 July 1922, such a memorial had been conceived, designed and constructed.  It was unveiled that day by Sir Robert Heaton Rhodes, M.P. for Ellesmere and Minister of Defence.

The resulting war memorial was located centrally in the county, as requested by Councillors, in Springston at the intersection of Ellesmere Junction and Leeston Roads.  As Sir Robert noted at the unveiling

“…no better site could have been selected for it.  Where it stood at the intersection of two roads it could be seen by all passing near it.”

That would have been facilitated by many local farmers delivering dray loads of soil to create a mound for the memorial according to local accounts.  Unfortunately the precise history of how that happened has been lost as a result of a fire which destroyed many of the original records.  No separate Certificate of title was issued for the memorial site until 1926.  With the establishment of Anzac Day in 1922, with the Poppy Appeal, the County’s remembrance ceremonies then centred on Springston, with the Anzac Service in the Community Hall followed by a march to the War Memorial.

Springs Branch of the Returned Servicemen’s Association now operates over those parts of the former Springs County enclosed by State Highway I to the west, the Selwyn
River to the south, the Halswell River to the East, and then Tai Tapu Road and East Belt, Lincoln, before being linked by Boundary Road back to SH I.  When Springs County War Memorial was unveiled in 1922 the Springs County sub-branch of the Returned Soldiers’ Association had not yet been formed.  Although the first returned soldiers’ association had been founded in Christchurch in late 1915 and the New Zealand Returned Soldiers’ Association on 28 April 1916, these bodies were not evident in initiating the war memorial.  The Springs sub-branch RSA was constituted on 7 July 1930.  Initially the sub-branch incorporated members from an area within 20 miles of Springston.  Lincoln, although it was a much larger community than Springston, had no separate RSA branch or Anzac ceremonies.

A Memorial Hall had been constructed by the Old Students Association at Lincoln College, and dedicated in 1924, which became the focus of some remembrance activities.  However, a more formal memorial for Lincoln was not proposed until Professor Eric Hudson suggested a multipurpose Lincoln Community Centre, which would also be a Lincoln War Memorial, in December 1945.  That was opened in a scaled down form in 1965, but eventually demolished after the 2010 earthquake.  Then a new Lincoln War Memorial was dedicated on Anzac Day 2011 adjacent to the new Lincoln Events Centre.  Since then separate Anzac Services have been held in Springston and Lincoln.

The Springs Memorial Cycle Way 1915-2015 commemorates those of Springs County, Springston and Lincoln townships, University, and further afield, who died in the service of their country.  As Sir Robert Heaton Rhodes said at the original Springs War Memorial’ unveiling:

“…It was not set up to commemorate war, but the great sacrifice made by the sons of the district, and it would serve to show the children that the men who went before them gave their lives that their relatives might be free.”

It effectively inter-connects the community by providing a safe way for cyclists and pedestrians to move between those centres with memorials, both old and new, safe from the increasingly heavy traffic flows on Ellesmere Junction Road.  It is a fitting memorial, after one hundred years, to recall again that sacrifice. 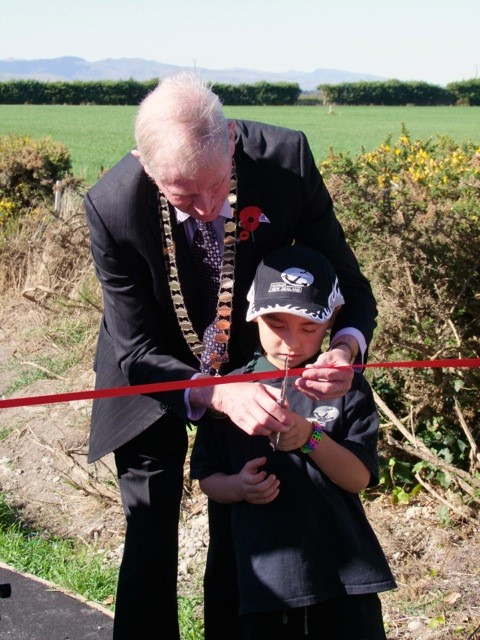 ADDRESS ON OPENING AND DEDICATION OF

I am sorry I am not able to stand today but I had a total ankle replacement on Tuesday in St George’s, and I am ‘not weight bearing’ on my right ankle.

The full story is given on the Poppy Places Website.

Now I call on the Reverend Mark Barlow to dedicate the Cycle Way,… please Mark.

No references are recorded for this story.