Sapper Horace Moore-Jones (1868-1922)
Soldier, artist & teacher whose WWI Gallipoli Campaign painting ‘Man with the Donkey’ is the enduring Anzac image. This is acclaimed one of the most important pieces of Australasian war art, symbolic of the nation-building sacrifice of war & birth of our nationhood. Yet the artist is rarely recognised, historically invisible, his life and heroic death in Hamilton largely an untold story.

This street was originally called Marlborough Place, the name was changed on 30/11/2012.

On 30 November 2012 ‘Marlborough’ became the nation’s first ‘Sapper Moore-Jones Place’ in the presence of 11 of Moore-Jones’ descendants and the son of the medic portrayed in the artist’s ‘Man with the Donkey’ painting. The military engineering title ‘Sapper’ was argued to account the war artist’s Anzac and Gallipoli record

Horace was born in 1868 (or 1869) at Malvern Wells, Worcestershire, England. He came to New Zealand with his parents on the barque Glenlora in 1885, the third of 10 children in the Jones family, the move prompted by his father’s bankruptcy. His elder brother Garner’s diary on the trip is held in Auckland War Memorial Museum.

Father David Millichamp Jones carried the names of both parents John Jones and Harriet Millichamp, and in the new country the large family became ‘Moore-Jones’ in response to the tag ‘too many Joneses’ or ‘not more Joneses’.

David (1835-1926) was an engineer and wife Sarah Anne Garner (1839-1929) a schoolteacher. She soon became Principal of the new Remuera Ladies College in Portland Road which expanded to Cleveland House, a turreted mansion in Garden Road where she remained in charge until 1923. This was also the Moore-Jones family home, to which Horace would return again and again.

James Mack wrote that Horace realised early his vocation was in art, soon married his Auckland tutor and notable portrait painter and sculptor Anne Dobson, and moved to Sydney in 1892.

Family tragedy interrupted Horace’s personal life: only one of their three children survived, and then his influential wife Anne died on 7 June 1901, leaving their toddler Norma to his care. This daughter would die in June 1921 aged 22, a few months before her famous father.

Horace married Florence Emma Mitchell and had three children. By 1908, the young family was back in Auckland

In 1912, “the call of the art world of London and Paris could not be denied” and Horace left his young family at home to enroll at London’s Slade School to study under notable painters such as Frank Brangwyn, Philip Lazlow, Quiller Orchardson and Orpen.

In London in 1914 with war declared, Horace enlisted (5 October). He was tall and well-built, and gave an amended birth year of 1879, dropping a decade by cropping and colouring his hair and moustache to indicate 35years rather than his 47. He gave his occupation as artist.

On 25 April 1915, Horace was among the first fateful troops landing at Anzac Cove on the Gallipoli Peninsula in Turkey to begin the bloody First World War campaign we now know simply as ‘Gallipoli’ and commemorated annually on Anzac Day

From that disastrous arrival, he turned to his art to record what he saw. Observed sketching and verified as an artist, he was soon assigned to draw enemy-held territory by ANZAC Commander Lieutenant General Sir William Birdwood to make up for the lack of maps. He was attached to GHQ’s Printing Section and his topographical details were judged “an invaluable aid for planning operations and defence, and were used to illustrate official dispatches” (AWMM).

Their use to calculate enemy positions and targets were important in the wake of military decisions that had so endangered the soldiers in this harsh battlefield.

After seven months on the peninsula, wounded in his right hand and exhausted, he was invalided back to England a few weeks before the Allies evacuated

In 1918, the Waikato welcomed Horace as he continued his lecture tour, and his public popularity ensured his place in Hamilton history. Because so many people wanted his “facsimiles” when he exhibited his Gallipoli water colours in the town, he was at last persuaded to come to Hamilton to teach. He set up a studio in Frear’s Building in Garden Place for his portrait commissions and private teaching, and became Hamilton High School’s founding art master, returning to his Auckland home at weekends.

On Monday 3 April 1922, Horace Moore-Jones died a hero, returning twice into a fearsome inferno to rescue women trapped by the early morning hotel fire, until rescued himself by firemen from the roof-top, his own life leaving him hours later 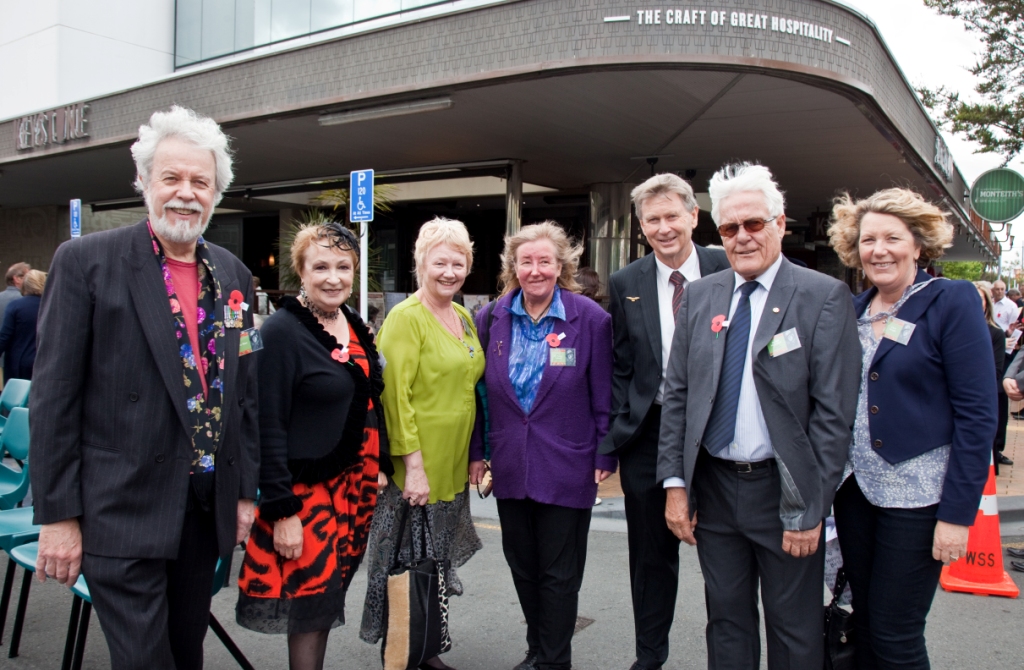 The commemoration of the street signage coincided with the unveiling of a sculpture of Sapper Moore- Jones being installed adjacent to the end of the street.  This work was unveiled on 27 March 2015 Marking this year’s centenary of the disastrous Gallipoli Campaign, “The Line of Fire” is the work of current Defence artist Captain (Hon) Matt Gauldie. It is being gifted by TOTI Trust from public fund-raising, donations and sponsorship. The large bronze weighs in at over 200kgs and depicts Gallipoli soldier-artist and Hamilton hero Sapper Horace Moore-Jones, known for his iconic Anzac painting “Man and the Donkey”.

The statue shows Moore-Jones sketching, as though at Gallipoli, kneeling on a seven tonne block of stone gifted and transported to Hamilton by the Turkish Government

No references are recorded for his story