In 1947 land (Lot 1 DP 8089) owned by DW van Asch was offered for purchase to the Hawkes Bay County Council in order to establish a Park as a permanent memorial to the Second World War. Also included with this street are: Memorial Park Avenue, Haumoana, Memorial Park, Haumoana Memorial Pavilion and Haumoana War Memorial (Arch).

The Haumoana Beach Improvement Society requested in 1951 that the road leading into the gated entrance of Memorial Park be named Park Avenue. At that time the road had no official name and was merely known in the area as Richardson’s Road. Although this request is shown as approved in the Council minutes of 10/11/1951, it appears no sign with the name was installed, and in 1954 a further request was made to name the road Memorial Park Avenue, the name it bears today.

The development of the project was coordinated as a whole, with the Hawke’s Bay County Council working with local people in Haumoana to facilitate the project and the subsidy from the Department of Internal Affairs.

A memorial plaque is installed on an archway, at the main entrance to Memorial Park, and includes the names of soldiers from the area who gave their lives in the first and second world wars.

These soldiers’ names have been identified as:

There is also a record for the Haumoana Memorial Hall, which lists the 90 men who saw active service during WWII, including 15 marked with a cross. See the photo.

Original blueprint plans from 1952 for Memorial Gates. As shown, the original plans were for a more standard gate, but internationally renowned New Zealand architect John Scott, whose own birthplace was Haumoana, donated his considerable design skills to both the Arch and the Pavilion to create memorials that were unique and appropriate for this seaside community.

John Scott donated the cost for his design work for the Memorial Arch and the Memorial Pavilion, as part of the community contribution. An invoice shows the nominal cost for his work at standard rates, for the DIA subsidy application and that contribution is noted in the schedule of voluntary labour.

The community rallied around this project, which was a comprehensive memorial park and facilities with a Memorial Pavilion and the Memorial Arch showing local people lost in the war.

John Scott was also commissioned by the Raukawa tribal executive to build a three-storey community centre as the Maori Battalion Memorial in Palmerston North. He was an architect who created his own way, drawing on New Zealand inspiration from meeting houses and woolsheds. People who live in the homes he designed have said it is like living in a work of art. The style also lent itself well to churches, and he designed a number including  a chapel for St John’s College, Hastings,  The Chapel of Futuna in Karori, Our Lady of Lourdes in Havelock North, St Joseph the Worker in Turangi, St Canice’s in Westport and Saint Mary’s in Napier.

More recently, the Pavilion had fallen into a state of disrepair, but Council worked with the Scott whanau and local community to restore it, with advice from John Scott’s eldest son Jacob Scott, a renowned artist and architectural designer in his own right. 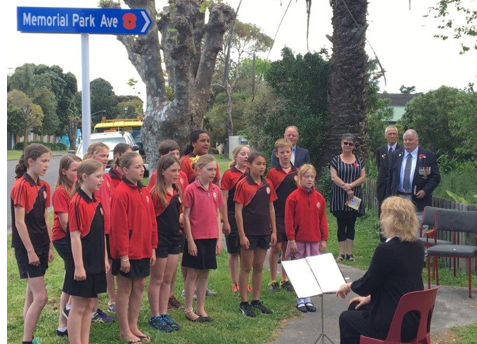 The event was planned with Haumoana School, Haumoana Playcentre, Te Awanga Kindergarten, Hastings RSA, the Minister of Veterans’ Affairs, members of the Scott whanau, local councillors and other community members. Joe Bolton from the Poppy Places Trust in Wellington also came up for the day. Cr. Rod Heaps conducted the formalities on the day.

A booklet was prepared for the community and posters were distributed inviting the wider community.

Key contacts were identified and asked to let others in the community know what was going on, and letters were sent to the residents in Memorial Park Avenue to ensure they knew about the poppy places project.