This Timaru street was named in honour of local citizens who died in World War 1.

Street names associated with New Zealand participation in overseas conflict are now being recognised in Timaru by the placement of poppies on street signs.

The South Canterbury Returned and Services Assocaition (SCRSA) and the Timaru District Council have already placed a poppy on the Memorial Ave sign as part of the nationwide Places of Remembrance Project, carried out by a group known as the Poppy Places Trust.

SCRSA president Ross Seaton says Memorial Ave is the first street sign to be chosen because veterans can associate with it.

"The name of the street sign was changed from Charles St to Memorial Ave in 1920 because the veterans marched up the street to the memorial at the Bay. Placing a poppy on the sign is a way of saying they will not be forgotten."

Seaton said he really appreciated the council getting behind the project.

"We have asked the council to place poppies on Kitchener Sq and Jellicoe St, the former associated with Field Marshall Horatio Herbert Kitchener, who proposed an invasion of Alexandretta, Turkey by Anzac troops, and the latter associated with the Governor-General of New Zealand from 1920-24, John Henry Rushworth Jellicoe."

The impetus for the project is the direct relation between street and place names and people and events from overseas military history.  Stuff.

War memorials can be any tangible object which has been erected or dedicated to commemorate war, conflict, victory or peace; or casualties who served in, were affected by or killed as a result of war, conflict or peacekeeping; or those who died as a result of accident or disease whilst engaged in military service.

The Commonwealth War Graves Commission (CWGC) memorials exist in order to officially record servicemen and women who died during the designated war years in service, or of causes attributable to service, and have no known grave or were buried or lost at sea. The British Imperial War Museum’s (IWM) War Memorials Register (WMR) uses this definition to help the public and organisations identify a shared understanding of what is meant by a war memorial.

The NZ Poppy Places Project is about ensuring we never forget. It is about a place where our hero’s contributions and their stories are linked to the physical via the simple placement of a poppy on a memorial. Many of our street names and places are directly related to people and events from overseas military history. They are memorials and they are often known to only a small and shrinking number of citizens. These street names and other places such as bridges, parks, buildings, trees, walk-ways and cycle-ways are memorials which have a link to our military involvement in a conflict or operational service overseas.

The Poppy is the most powerful and easily recognised symbol of both courage and sacrifice that we have as New Zealanders. By using the Poppy (an internationally known symbol) to mark these places, those that pass by will see the Poppy and be reminded every time of ANZAC.

There are many places in New Zealand that use the term Memorial and if that memorial is adorned with a poppy in the future then it commemorates and recognises as part of the heritage of New Zealanders, the participation of New Zealand in military conflicts and military operational services overseas.

To be considered a memorial the object must have a clearly defined and stated commemorative purpose. This purpose can be expressed in the wording on the memorial itself or in a printed document, or it might be a newspaper announcement. Street names have a clearly defined commemorative purpose and the reason for naming is usually recorded by the local Councils. The placement of the Poppy identifies and confirms the name as a war memorial.

Conflict/war includes formally declared states of war, armed conflict, civil war, rebellion and acts of terrorism. The Poppy Places Trust neither makes any judgment on conflicts nor promotes any political or other viewpoint associated with either specific conflicts or the general principle of conflict.

Military service refers to service in any of the armed forces during war, conflict or peacetime and the subsequent return home as well as deaths after the end of the conflict as a result of wounds or the effects of war.

Civilian service refers to those who served in wartime non-combatant services including, but not exclusive to Merchant Marine Service, Red Cross, Home Guard, Air Raid Wardens, Fire Watchers and similar groups involved with a war effort. 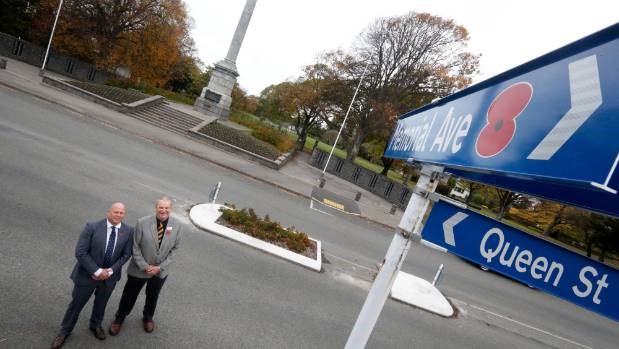 The South Canterbury Returned and Services Assocaition (SCRSA) and the Timaru District Council have already placed a poppy on the Memorial Ave sign as part of the nationwide Places of Remembrance Project, carried out by a group known as the Poppy Places Trust.

SCRSA president Ross Seaton says Memorial Ave is the first street sign to be chosen because veterans can associate with it.