While the street was named after Freyberg, Governor-General of New Zealand 1946-1952, it should be also be considered in light of Freyberg’s military reputation and service.

Freyberg Street is in the Solway suburb of southern Masterton. It is part of an area between High Street (SH2) and York Street which was still bare land in the 1950s. The increasing population of Masterton led the Masterton Borough Council to supply extra urban sections and this area was subdivided in the late 1950s. Freyberg Street connects Bledisloe and Fergusson Streets.At a meeting of Masterton Borough Council on 22 July 1958 it was moved by Councillor Morton, seconded by Councillor Donald:

“That the following names representing former Governor-Generals in New Zealand be allocated to the streets in the new subdivision between High St and York Streets.

In fact, Galway was never used, and Liverpool was used in a second group of streets named after governor-generals, and formed in 1975.

While the street was named after Freyberg, Governor-General of New Zealand 1946-1952, it has also been considered in light of Freyberg’s military reputation and service.

Bernard Cyril Freyberg, 1st Baron Freyberg, VC, GCMG, KCB, KBE, DSO and three bars, (1889-1963) was born in Britain but moved to New Zealand aged two and attended Wellington College. He was a champion swimmer and trained as a dentist. He left New Zealand in March 1914 and was in England when war broke out in August 1914. He became an officer in the Royal Naval Division. During the Gallipoli landings, he swam ashore in the Gulf of Saros, lighting flares to replicate a landing. He was wounded at Gallipoli and on the Western Front, where he won the VC in November 1916 in the closing stages of the Battle of the Somme.

In April 1917 he was promoted to temporary brigadier-general and by war’s end, had been wounded nine times in France and was among the most decorated British soldiers of the war.

In World War Two he was approached by the N.Z. Government to lead the 2nd NZEF, a position he held until November 1945. He also commanded the 2nd NZ Division throughout the war in North Africa, Greece, Crete and Italy. Known by the soldiers as ‘Tiny’ he received additional wounds during the war. He led the division from the front and showed great concern for the welfare of his men in and out of action.

In 1946 he accepted the position of Governor-General, a popular choice because of his leadership of New Zealand’s army during the war. In 1951 he was created Baron Freyberg of Wellington and after 1952 he returned to live in England, where he died in 1963. 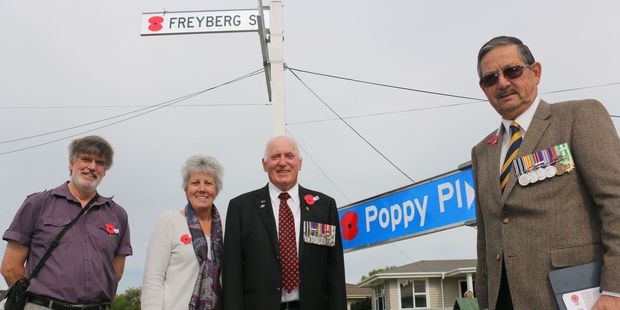 Three new street signs that feature a poppy flower were unveiled in Masterton on Sunday as part of a nationwide initiative which recognises New Zealand's military history.

The Places of Remembrance Project is about identifying and recording New Zealand street names that have a connection to the country's overseas war efforts.

New street signs were unveiled on Freyberg St and Jellicoe St in Solway, and on Allenby St in Lansdowne.

The three streets have now been added to the national list of streets now known as "Poppy Places".

The project by the New Zealand Poppy Places Trust is one of many initiatives encouraged by the Government to commemorate the centenary of World WarI.

At the unveiling of the Freyberg St sign, Masterton mayor Lyn Patterson said it was fitting the project's launch in Wairarapa had come at a time of remembrance.

"It's great that we are recognising the history of our street names, and particularly at this time. It's a way to highlight their relevance, and in a way for the young ones to understand."

Each "Poppy Place" street sign has a QR code from which people can learn more about the project.

However, he estimates there to be "about 3000" street names in the country with a connection to New Zealand's military service overseas

“That the following names representing former Governor-Generals in New Zealand be allocated to the streets in the new subdivision between High St and York Streets.

no references are recorded for this story