This Lower Hutt Street was named in honour of Lieutenant Colonel Eruera (Edward) Te Whiti Rongomai Love, MID the first Maori commanding officer of 28th Maori Battalion in World War 2. He grew up in Korokoro. Colonel Love died of wounds received while with the battalion on 12 July 1942 in Egypt.

Lieutenant Colonel Love joined the New Zealand Territorial Force in 1922, he was commissioned second lieutenant in 1926 and eventually became a company commander in the 1st Battalion, Wellington Regiment (City of Wellington’s Own).

With the outbreak of the Second World War he joined 28th (Maori) Battalion at Palmerston North.  He embarked with the battalion as officer commanding Headquarters Company eventually to England, then to Egypt, then into action in Greece and Crete and Egypt.

He was widely acknowledged as a strong leader in and outside the battalion.

6133 Lieutenant Colonel Eruera (Edward) Te Whiti Love’s parents moved from their sheep station, Homebush, on Arapawa Island to Petone in 1911, and established the family home, Taumata, at Korokoro. He attended Petone West School and joined the cadets aged 11, moving to the Territorial Force in 1922. By May 1926 he had reached the rank of second lieutenant. He studied law at Victoria University College in 1924 and 1925 and became an interpreter with the Native Land Court.

He rowed with the Petone Rowing Club and played in the local Maori cricket XI, but it was in rugby that he excelled. He played for the Petone team, then for Wellington. He was a member of the 1925 and 1926 Maori All Black teams, the second of which toured France, Britain, Canada, Australia and Ceylon (Sri Lanka).

On the outbreak of the Second World War, Love, already a company commander in the Territorial Force, was seconded to Army Headquarters to assist in forming the 28th (Maori) Battalion which was raised in Palmerston North.  He then served briefly as commander of D Company before being appointed to the command of Headquarters Company. Love embarked with the battalion on the Aquitania for England in May 1940. By March 1941, the battalion was joining up with the 2nd New Zealand Division in Egypt.

At this time, he was described as ‘a big man, not tall, of average height, but otherwise solid and compact’. He was said to roar his orders, and was dubbed ‘The Bull’ by his men. His voice could be “heard a mile away”.

The Māori Battalion moved with the New Zealand Division to Greece in late March 1941, and took up defensive positions against the invading Germans at Olympus Pass. Forced to withdraw with the rest of the allied force, the battalion was evacuated to Crete.

In the confusion of the withdrawal, units were mixed up, on the way to Crete the unit history merely states:

“Captain Love and about forty men of Headquarters Company remained on the island until brought back two nights later and safely embarked.”

While the history of the Supply Company for the same time, states:

“The landing craft continued to labour interminably through the heaving sea. Then from the hatch above Captain Tui Love, of the Maori Battalion, called for attention. ‘The warships have gone and you are being taken to Kea Island,’ his voice said through the darkness. ‘It is the best the Navy can do. When you reach your destination you will disperse but remain on call in case the Navy can arrange to pick you up. Otherwise you must find your own way to Crete. One last word: you must expect aerial attacks and be prepared to repulse landing parties.’

And on ANZAC Day 1941, in the history of  the Supply Company  at Crete

“While the men rested, the senior representative from each of the eleven groups attended an officers' conference called by Captain Love. Infantry, engineers, NZASC (New Zealand Army Service Corps) and medical were the main groups, the largest, under Morris, being Supply Column. Love was selected as OC troops”

The New Zealand Division’s task on the island included defending Maleme airfield. In a moving letter to his wife, Eruera described his horror at the necessity of killing German paratroopers as they emerged for a time helpless from their planes.

On the night of 22 May the battalion was ordered to attack the airfield, which the Germans had captured. During the fighting he became isolated with about 10 men. Early in the morning of 23 May they came under heavy anti-tank and machine-gun fire. They rushed the guns and killed the crews, but Love was wounded in the shoulder. The wound became numb but he was able to carry on through another day of bombing and machine-gun fire.

In the history of the 20th Battalion and Armoured Regiment, Lieutenant McPhail of B Company commanding his platoon in this rearguard writes:

“We took up a defensive position … on the beach under Tui Love of the Maori Battalion. While there Guy Rhodes used his mortars very effectively…. The Germans were seen coming up between the road and the beach with something that looked like a Bofors gun and obviously digging in. One of our tanks was … in the courtyard of a house or blacksmith's shop but was very dubious about attacking the position, so Tui Love got a Bren carrier, called for two or three Maoris, and rushed the Huns. They had a heavy MG but Love mopped them up and then returned—a good show.  While there we were given great treatment by the Maoris. They must have found a dump … for when I said we were hungry they gave us pineapple and tinned milk. When the men needed clothes they were given socks and greatcoats.”

After several more days of fighting, they were evacuated to Alexandria in Egypt.

Following a period of training for desert warfare, the Māori Battalion was moved to El Alamein. On 23 November 1941, the battalion was in action again, its task the capture of Sollum, near the strategic Halfaya Pass. Lieutenant Colonel George Dittmer was wounded in this action, at Sollum, and command devolved on Captain Love.  During this time Captain Love was fighting off an attack of arthritis and would not accept the medical officer’s advice that he should be evacuated.

During Love’s temporary command, Captain Rangi Royal and B Company achieved a victory at Musaid, capturing 15 enemy vehicles. Sent to Menastir to block supplies from Bardia to the Afrika Korps, the battalion won a significant victory against troops from the 15th Panzer Division on 3 December 1941, forcing a German retreat.

The battalion regrouped in the Sollum–Capuzzo area, and here on 7 December 1941, Love handed over command to the new commanding officer Lieutenant Colonel Humphrey Dyer. Before leaving for hospital (the result of his wounds on Crete), he complimented the battalion on the action at Menastir and also reminded the troops of the good treatment accorded the B Echelon (the left out of battle component of the battalion) during the short period it had been in enemy hands. After recovering in Cairo, Love rejoined the battalion in Syria in March 1942 as second in command with the rank of major.

In May, Lieutenant Colonel Dyer was relieved of his command after being ordered to and unwilling to declare surplus captured enemy weapons held in the battalion.

Replacing Dyer, on 13 May 1942, Love was promoted temporary lieutenant colonel and given command of 28 (Maori) Battalion. He was the first Māori to command the battalion, and this was met with jubilation by its members.

With Field Marshall Erwin Rommel’s attack on the Eighth Army in Libya and capture of Tobruk, the New Zealand Division returned to North Africa and on 25 June took up defensive positions at Minqâr Qaim. By evening on 27 June the  Division had been encircled by the 21st Panzer Division. At 1.45 a.m. the Māori Battalion joined the 19th and 20th battalions in leading the division in a breakout that reached the El Alamein line.

In an illustration of the leadership of Colonel Love, Lieutenant Hayward wrote in a letter home:

“In the late afternoon,’ he writes, ‘a column of tanks was observed approaching the box from the NE. (What appeared to be a tank battle had been going on to the N (North) most of the day.) I was told to report to Bn HQ.

Col Love—“You're to find out whose they are. They could be ours or they could be theirs.”

Col Love—“Take this blue flag. When you are close enough to be clearly seen stand up and wave it in a circular motion above your head. If they are ours they will reply in the same way.”

No more, no less. You will of course have guessed they were our own.”

Early in July 1942 the New Zealand Division was ordered to attack Ruweisat Ridge, an important strategic feature dominating the desert near El Alamein.

The attack took place on 11 July and developed into a siege. Just after dusk Love and his adjutant drove up to see how his men were faring; his vehicle attracted enemy fire and he was mortally wounded, dying later that night on 12 July; he was only 37. He was buried in Egypt at the El Alamein War Cemetery along with1065 other New Zealand casualties.

He was survived by his wife, who died in 1947, and by their four children.

Naming. Dictionary of New Zealand Biographies (DNZB), writes he was known to his family, and to the men he commanded, as Tiwi, sometimes Tui. He is listed as Edward Te Whiti Rongomai Love on the Nominal Rolls, Commonwealth War Graves Commission (CWGC) and Rolls of Honour. Listed by DNZB as Eruera Te Whiti o Rongomai Love.

Colonel Love is doubly honoured as Tewhiti Grove, Korokoro, Lower Hutt, is also named after him. 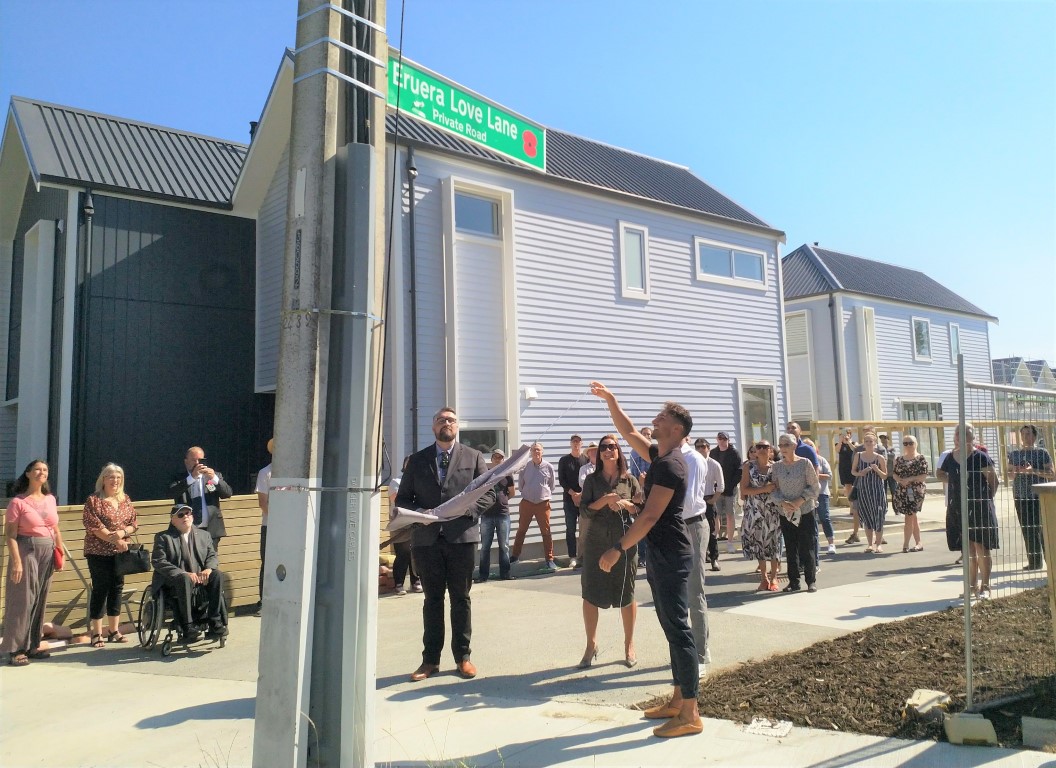 A small, but moving ceremony, hosted by Dan Moriaty Chief Executive of developer UPL, was held on Friday 26 March 2021 at the site.

There were many descendants of Lt Col Eruera Love present. Including:

Terry McBeth (Chair) and Philip Blundell (Project Manager) from the Poppy Places Trust were in attendance.

(i)      approves the name for the new private road in the new Subdivision of 20A        Bauchop Road and 28 Freyberg Street, Waterloo, attached as Appendix 1 to the report, as Eruera Love Lane, Love Lane or Eruera Lane subject to approval from LINZ;

(ii)     approves an appropriate back up road name for the selected option of (i) as Poppy Lane;

(iv)    approves the appropriate road type (as permitted by the New Zealand Standard AS/NZS 4819:2011) as shown attached as Appendix 3 to the report; and

(v)     asks officers to investigate a method of increasing the number of potential  street names on the Reserved Street Name list.”